Vigyan Prasar is an autonomous institution under the department of Science & Technology, Government of India which is working to reach out and engage the youths of the country working in the field of science. A concerted effort was initiated in 1998 by the agency to bring various science clubs by VIPNET (Vigyan Prasar Network of science clubs). After getting the affiliation, depending on the number of science activities in a year, the schools can get the membership of various clubs e.g. gold, platinum clubs etc.

Cambridge School Greater Noida is a member of Science Club ‘CYGNUS’ (VP-UP0164) by VIPNET (Vigyan Prasar Network of science clubs) affiliated to Vigyan Prasar. The club has been upgraded twice since its affiliation and presently in the ‘Silver’ Category. 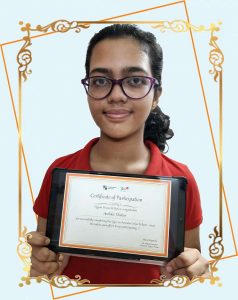 Our students Bhavyansh Bhalla and Shubhangi Jaiswal were appreciated by the VVM team & VIBHA for their experiment in Physics while Preet Bhati of class VIII and Abhishek Prasad of class IX received the glory in Biology and Chemistry respectively. The link of appreciation videos are been given below: