Home » Blog » What to teach kids charity and selflessness 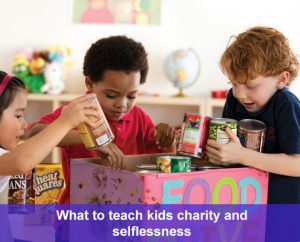 Whenever we see someone unprivileged or an unemployed low-income person struggling to sustain him and his loved ones, we all feel sad about them for a moment and then move on with our lives. It’s the truth of our world, and we can’t do anything about it most of the time. But in some cases, a little affection and kindness from us can be enough to change the life of someone. Yet, most of us think that the next person who’s more capable should help them. But sadly, everyone waits for that other person in these situations, and nothing ends up happening. But if we learn these lessons earlier in life, the situation might be different now. Hence, the best school in greater Noida believes in explaining the importance of selflessness in children’s formative years.

But there is still such a massive gap between the privileged and the less privileged. Most of us think that the problem is being poor and the only way to help is by giving the needy thousands of rupees and nothing. But being selfless is so much more than that, and not every help you give has to be monetary value. Money is said to be an abomination of our society. Too little and you can’t be a part of the society, and if you have too much, you would be cast out of society.

But the concept of poor and rich persists because we choose to ignore other problems. Hence, we have to re-evaluate our confusion of showing kindness by doing charity and even the top schools in greater Noida teach the children the need for selflessness. Our children are the future of our world, and they are the ones who would either improve this world or make it worse. And teaching your children the concept of charity and selflessness would be crucial and helpful for the very fabric of society they would be a part of in the future.

So if you want your child to learn such qualities as selflessness on a daily basis, search for Cambridge school near me and get them enrolled there. But there are many misconceptions about being selfless that need to be addressed beforehand. You don’t have to come from a wealthy background or have resources to help the needy.

The first step of incubating the idea of selflessness has to begin at home. Even teaching them to share their belongings with others can do wonders for developing kindness in your children. Even if they are having a snack, ask them to share it with others, or if playing, ask them to be nice and play with other children. It would create a sense of selflessness in them, and they would also understand that it is not just a mere activity but their role to share.

It can start from the least expected places like your kitchen. You can cook extra food and give it to some children who need it or place water and food on the street to feed the dogs or animals. The main context is that it is not the amount of charity you’re doing, but the amount of love and cause you’re putting behind the charity.

Many parents make examples out of the low-income groups like if you don’t study you would become like him or if you misbehave you would be like that child begging. That is a disturbing thing to teach your children. Not only are you downgrading those hard-working people but portraying a bad image of them in a child’s brain.

When teaching children about charity don’t ever teach them it is something to be glorified but something that should be voluntary. Instead, your lesson should be that you should help all these needy people without looking for any gratification. Hence, you have to encourage them to be considerate and help them to any extent of their capability.